Triangulation is the process of pinpointing the location of something by taking bearings to it from two remote points.
Forest fire lookout towers used triangulation to locate spot fires.

A ranger at Tower A would see smoke in the distance and take a bearing to it on his compass. This single line was not enough information to locate the fire because it could be anywhere along that line, close or many miles away.


The ranger would radio Tower B and tell him the general direction of the fire. Tower B would then find the fire from his viewpoint and take a bearing. Where the two bearings crossed would pinpoint the fire and firefighters could be efficiently dispatched to put it out.


Sometimes, a third tower would be used to verify the location, but two readings are all that is usually necessary. If a fire occurs directly between two towers or off in a direction that causes their bearings to be similar, then a third bearing is necessary.

This type of triangulation is used by two fixed spots to find a third unknown spot. What you need to do while in the outdoors is similar, but you need to find out where you are, not where something else is.

In order to successfully triangulate, known features must exist on your map. In other words, you must have some idea of where you are or be able to identify a well-known landmark from your viewpoint.

By taking bearings to the distant landmarks, you can plot your current location on your map in this way: 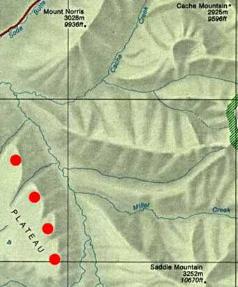 This example will step you through the process of triangulating your location based on bearings to two or more known landmarks.

Look at this section of map - it has mountains, streams, and hills as indicated by the shaded relief enhancements. Notice it does not have contour lines but that doesn't matter when we are just finding directions.

You might find it useful to print the image and actually do these steps.
Print the map and lay it on the floor.
Orient the map for North right where you are and imagine that you can see mountains off in the distance.

You have just climbed the plateau in the southwest, coming up from the southwest. You do not know at which of the 4 red spots you are currently standing, but you can see 3 mountains off in the distance towards the north and east. 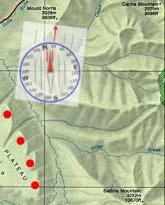 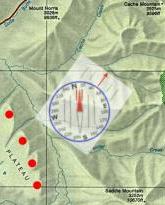 For your triangulating, you take bearings to the mountains and get:

To simulate taking each of these bearings, turn your compass dial until that bearing is at the index pointer. Then, turn the compass until RED is in the Shed and the direction-of-travel arrow will be pointing along that bearing.

Transfer your bearings to the map and find out where they intersect. If you oriented your map, took correct bearings, and transferred them accurately, your map should look close to: 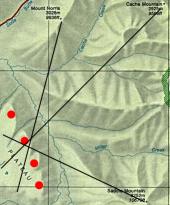 Now you know where you are on the map and in the real world. If you didn't do too good on this one or want to try another, here's another exercise to try.

Next: Plotting a Route

Comments:
Jun 26, 2016 - Carlos Hinojosa
I don't have a comment about your page, but I do have a question.  I'm trying to determine the exact coordinates of a distant object.  For example, I can go to the pier and look out into the Gulf of Mexico and see some gas wells about 5 to 6 miles away.  A lot of times, boats will stop at unmapped underwater structure and catch Red Snapper.  I'm guessing that would occur about 4 to 5 miles from where I'm standing.

If they're catching fish, I can see with binoculars and they're not likely to move from that position for some time.

Next, I can drive along the beach to get another bearing to triangulate.   The only problem is that my iPhone can't see the object because it's so far away.

It is easy to get my coordinates, but how can you accurately get the bearing from my current location to the object?  Let's assume you tell me that if I buy some gadget like a scope with a bearing detector, how can I combine both locations and bearings to input the coordinates into my GPS?

Carlos
Jun 27, 2016 - Compass Dude
@Carlos - What you are asking is just what the content of this page explains.  You use a compass to take a bearing to the distant object from two separate locations, find those two locations on a map, draw a line along each bearing taken, and where the lines intersect is where the distant object is located.
Aug 30, 2016 - ametepey daniel
is interesting,i happen to be a forensic science student so is more of a great study here...
Sep 12, 2016 - Frankie
Great article. I learned exactly what I needed to learn. Laid out in an easy to learn format.

Thank you for your contributions.
Oct 09, 2016 - Billiam
Any good techniques for finding your location in the woods, if you can't see certain reference points such as mountains?
Dec 28, 2016 - Compass Dude
@Billiam - Yes, use a GPS.
Jan 02, 2017 - joseph brown
thank you. you helped me allot
Feb 12, 2017 - Bob
A nice app to help:
www.videreresearch.com/projects/geolocation-web- application/compass-triangulation
May 05, 2017 - Benjamen
This is awesome please take my money
Jun 13, 2017 - Jami Greene
How do you locate bearings on a map without meridian lines?
Jun 13, 2017 - Compass Dude
@Jami - If your map has some direction indication on it, such as North with an arrow, you can draw meridian lines that parallel that North-South direction.
Or, just place your compass's orienting lines as close to that north-south direction as you can estimate.   It won't be very accurate, though.
Apr 23, 2018 - Dmitry
I think "orient your map" step is unnecessary here. We already has taken the landmark's bearing, i. e. has fixed the angle between direction-of-travel arrow and N mark on the dial. Now we can "transfer" this angle to the map (aligning orienting lines with meridians and sliding the baseplate until the top edge is on the landmark) regardless of how the map is oriented in the "physical" world.
Ask a Question
Bike